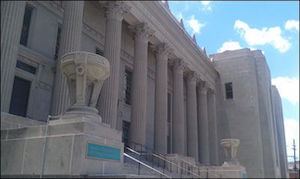 The attorneys of DiGiulio Utley defend clients accused of murder and violent crimes in both state and federal courts.

Prosecutions for violent crime often depends on very specific facts. Murder and violent crime defense requires an intensive investigation as soon as possible. At DIGIULIO UTLEY, LLC, Attorneys at Law, we are aggressive in the pursuit of evidence including police reports, witness statements, medical documentation, hard evidence, and routinely work with experts to effectively build and secure your defense.

Contact us now for a free consultation and evaluation of your case.

Contact Us
Practice Areas
Client Reviews
★★★★★
"I hired Dylan in 2011 to represent me after I was falsely arrested for domestic battery. Dylan was able to prove to the prosecuting attorney that I was not the aggressor in the case. He did a phenomenal job representing me and was extremely professional in his communication and knowledge of the Louisiana legal system. Thank you so much for helping me.” Richard M.
★★★★★
"He is the most professional and caring attorney. He was there for us in every aspect. He answered any questions or concerns and was very upfront and honest. We live out of state and he made it so we could bring our daughter home and not have to make trips back to Louisiana for every court appearance. He was great during a really hard time in our lives and he was there for us every step of the way. Dylan is the BEST ATTORNEY EVER!" Lisa B.
★★★★★
"DiGiulio Utley Criminal Defense Attorneys came to my aid in a great time of need. I live out of state and they were able work with the court to prevent many trips back and fourth during the proceedings. They are professional, up front, factual and well connected within the NOLA legal system. You can trust you are in good hands with the advise they render. I will use them again during the expungement process. This team will go the extra mile to make sure your taken care of. We could not have felt more comfortable in a situation of unrest than we did with them." Jordan L.
VIEW MORE
Submit a Law Firm Client Review